Posted on February 25, 2014 by strategyaudit 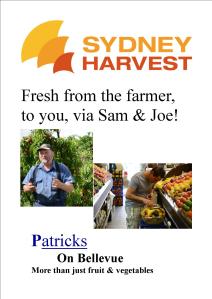 A pilot program I have been recently  involved with, setting out to  assist the evolution of a” Sydney Harvest” brand of local produce has not delivered the results hoped for.

After years of agitation by produce growers in the Sydney basin, beset as they are by aggressive competition from the chain stores, lack of scale and high operating costs as a result of being in semi urban areas, governed by urban concerns, the pilot was created. It was a collaboration between a small number of Sydney basin growers, and specialist retailers aimed at delivering the freshest and best possible  produce to those discerning and demanding customers who choose to shop at the specialist produce outlets.

The value proposition was simple : “You know it is fresh, because it come from down the road, you know  the retailer, and here is the grower, guaranteeing product provenance and farming practice sustainability”.

In considering the reporting of the exercise, part of the shortcoming of the pilot was that there was little commitment beyond the verbal from the participants, even though the verbal commitment was strong. This is very common in the early stages of  collaborative exercises, everyone says “yes” and waits for others to do the lifting. The emergence or otherwise of a “champion” someone who takes on the challenges at a visceral level, can be the main bellwether of success.

Watching a presentation by Seth Godin last night, he articulated just the situation we had.

There was no “connection” between the participants beyond the superficial, the human connection was not  there.

Godin calls Connection “The asset of the future” and in a connected world, it would be hard to argue against this proposition. He further identified 4 pre-conditions of connection occurring.

This stuff is really, really, hard, and the only way we learn is by jumping in and having a go.

StrategyAudit is a boutique strategy and marketing consultancy concentrating on the challenges of the medium sized manufacturing businesses that make up the backbone of our economy. The particular focus is on their strategic and marketing development. as well as the business and operational efficiency improvements necessary for day to day commercial survival. We not only give advice, we go down "into the weeds" to ensure and enable implementation.
View all posts by strategyaudit →
This entry was posted in Branding, Change, Collaboration, Demand chains, Marketing, retail and tagged Advertising, Agriculture, Alliance management, Branding, Change, change management, collaboration, communication, competitive strategy, customer, demand chain, retailer, Sales, Strategy. Bookmark the permalink.

4 Responses to 4 requirements of “Connection”